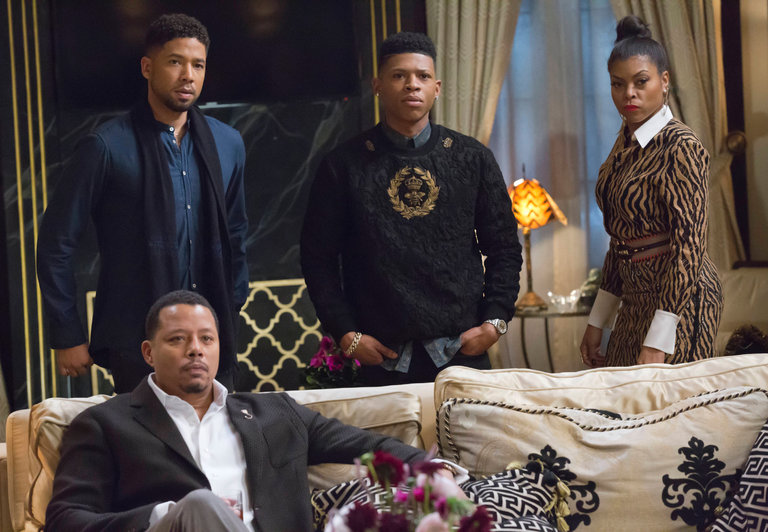 We begin this episode of Empire with Thirsty literally snatching hairs off poor Lola’s head in order to do a DNA test. I thought we’d established last season that Lucious was the father but I guess he’s been having doubts.

Everybody is in a tizzy getting prepared for the big shareholders meeting and Hakeem is pulling no punches in his bid to prove that he’s a worthy and competent CEO of Empire. Hakeem decides to up the ante by putting out the “Anthony & Cleopatra” line that he was working on with Camilla. I don’t know why this is supposed to prove his competency as a CEO but do you Hakeem. Of course Lucious takes this opportunity to do everything in his power to sabotage the show.

Meanwhile, Rhonda is deep in the lion’s den as she and Anika have a girls’ night in complete with the requisite girls’ talk. However, their evening is interrupted by Andre, who has come to tell his wife that he’s having a crisis of faith and he wants them to move out of murder mansion and begin anew in their relationship. Their deep and meaningful talk is interrupted by the sound of Anika throwing up in her bathroom. Anika lets the couple know that she’s pregnant with Hakeem’s baby and Andre takes it just about as well as you’d imagine. I’d honestly forgotten that Anika was supposed to be pregnant and she’s still not showing, so add this to the list of reasons why Empire’s timeline makes no sense.

In Jamal’s storyline, we find out that Freda Gatz is apparently a barber in her spare time when she’s not threatening to end suckers on wax. Jamal drops by to tell her that he’s decided to put her on two songs on his upcoming “Black and White” album and Freda couldn’t be happier. However, the writers really really really want us to know that Freda is about that life in IRL, so they have her beating the crap out of a customer who disrespects the memory of her father.

Jamal plays one of his songs with Freda to Cookie and she lets him know that she thinks it’s a bad idea to have her on the album. She lets him know that she’s set up a meeting with the hottest female rapper in the game, Stacee Run-Run (seriously, were the writers high?) and that Stacee has decided to bless him with a track for his album. Stacee, who is a dark-skinned facsimile of Nikki Minaj, complete with excessive pink clothes and accessories, lets Jamal know that she’ll only appear on the album if she’s the sole female MC so Jamal’s going to have to choose between her or Freda. Jamal lets Freda know that Stacee Run-Run’s (I really can’t) exclusivity contract means that he can’t have her on the album and although clearly hurt, she takes the news much better than I expected.

Andre meets with his brothers to let them know that he’s feeling better and ready to get back to work. It’s so nice every time we see the Lyons brothers together as a unit and I really appreciated this scene. He stresses to Hakeem the importance of the shareholders meeting in solidifying his role as CEO and Hakeem once again mentions the Anthony & Cleopatra line. However, immediately afterwards, we see Thirsty and his goons doing a laughably easy job of stealing all the clothes for the fashion line from the Empire warehouse. Hakeem angrily confronts Lucious but Lucious is so unbothered that we find out that he’s also sabotaged Laura’s tour by having all their equipment confiscated by the police. I feel like Lucious’s sons are constantly surprised by the levels of bastard Lucious can exhibit and I don’t understand. What more does this man have to do? Get with the program!

I guess Andre still hasn’t got the memo either because he pays a visit to his dead grandmother’s graveside with Lucious and they seem to have come to some sort of truce in their relationship. But this is Lucious we’re dealing with so I don’t expect this to last longer than the end of the episode.

High off the spirit of forgiveness, Andre gathers all the members of the Lyons family together so Anika can tell them that she’s pregnant with Hakeem’s baby. Everybody takes this as well as you’d expect. Rhonda implores everybody to remember that they’ve just lost an “heir” so Anika’s baby should be welcomed. Jamal is apparently the only person on earth who still believes that Lola is his and reminds them all of the fact. Lucious uses this opportunity to let them all know that Lola is neither his nor Jamal’s and my only thought is that I’m glad we won’t have to see Raven Symone again.

The shareholders meeting finally happens and to the surprise of absolutely nobody (except for Hakeem), Lucious discredits absolutely everything Hakeem has achieved in his tenure as CEO of Empire and gets himself voted back to the top of the pyramid. We find out that he was able to do this with information fed to him by Andre (et tu Brute?) and Andre lets Rhonda and us know that he’s back to playing to win.

Lucious pays a visit to Anika and offers her 10 million dollars to give up her baby at birth or risk him getting “ugly.” She tells him where to go and throws some not-so-veiled threats his way herself. Honestly, these two are such a mess the writers should have kept them together.

Jamal belatedly realizes that he’s made a big mistake, huge, in ditching Freda for Stacee Run-Run and comes crawling back for forgiveness. Freda leaves him to stew but I anticipate the reunion of this budding team by next week’s episode.

The episode ends with a genuine jaw-dropper as we watch Thirsty pay a visit to a Leah Walker, who’s being looked after in a nursing home. Lucious has been lying about his dead mother this whole time?! I cannot wait until the inevitable fallout from this revelation and let’s hope it’s sooner rather than later.