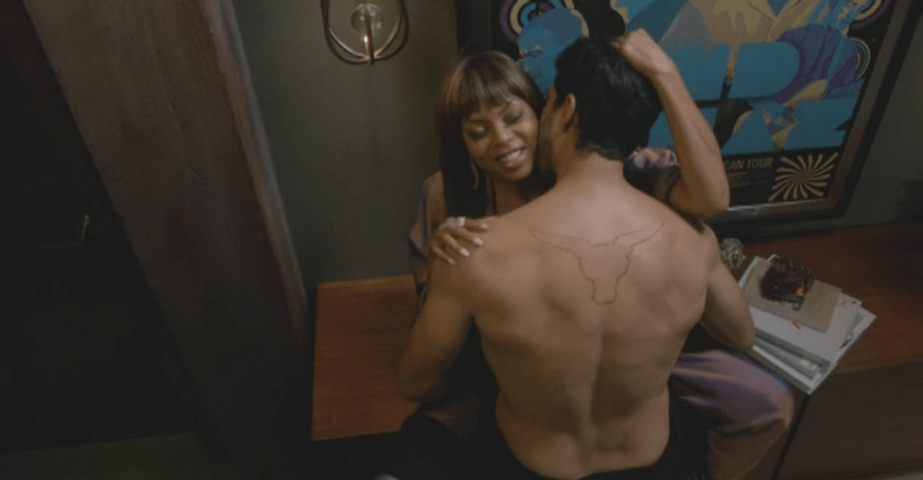 I spent most of this week’s episode of Empire asking myself what the hell was going on. This one was a doozy, even by Empire standards. But let me not get ahead of myself….

We start the episode just after Hakeem’s kidnapping and Cookie is sent a ransom video of youngest son tied up and bloodied. She immediately assumes that it’s a hoax until Lucious convinces her otherwise. Hakeem has been taken by the Cowboys gang who are all tattooed with what appears to be the University of Texas Longhorns logo and they rough him up before setting up a ransom drop with Cookie and Lucious. Oddly, they never show up to collect their money and in the next scene, we find a disoriented Hakeem stumbling through the streets of New York. He somehow ends up at Anika’s place, has sex with her, and then turns up at the Lyons mansion. I’m telling you, nothing about this kidnapping makes a lick of sense.

Hakeem’s behavior after the kidnapping is baffling and I originally wondered whether he’d been sexually assaulted by the gang members because that would have explained why Anika was his first stop after being released. Hakeem makes it clear that he blames both Cookie and Lyon for his kidnap since he’s known for being their son and he’s just being dragged into their turf war. However, he stumbles through the episode in a weird PTSD haze and I reiterate- none of this makes sense!

Cookie once again turns to Laz Delgado (Adam Rodriguez) for help with her gang problem and he suggests she turn the tables and hire the gang members that kidnapped Hakeem and assaulted Tianna. After an initial refusal, she comes round to the idea. She sets up a meeting with the gang members and brings Hakeem along so “he can feel like a man again”. Hakeem wastes no time in pulling out a gun on his captors and after Cookie calms him down, she lets the Cowboys know that there’ll be hell to pay if they come near her family again.

Becky is getting her groove on with handsome young Gutter Life rapper, J. Poppa and I have some thoughts about this scene. I know many a think piece has been written about this but I’m still going to put in my 2 cents. It’s cool that Becky, a large, dark-skinned black woman, gets to have a regular romantic scene without being the butt of joke but what exactly was the point of thee scene? The scene is only about 30 seconds long but it did absolutely nothing to further the plot so I was just left wondering what the point was. Maybe the utter ordinariness of it WAS the point. I’ll be keeping an eye on any further developments.

After getting his job back at Empire, Andre is back to being the pompous bastard of the early days of season 1. He’s ruthless in his quest to “prune the tree” at Gutter Life and this brings lovely little Freda (variously known as “Fantasia Loaf”, “Dej Noap”, and “Deji Load of Bread” over on Twitter) back into our lives. Freda is already on Andre’s chopping block and after she delivers an Eric Cantona-esque kung-fu kick to a heckler in the face at a Gutter Life showcase, Lucious is forced to pull rank to keep her at Gutter Life.

Andre convinces J. Poppa to veer towards the path of “holy hip-hop” and both Lucious and Becky are convinced that this may become a problem in the future. I’ll be observing this development right along with them….

Not to be outdone by Lucious, Cookie has her own showcase featuring Hakeem and Mirage a Trois and they are all understandably worried about Hakeem’s ability to perform. Lucious offers Hakeem a track he wrote especially for him as some sort of olive branch and Hakeem tells him in no uncertain terms where to go. This leads to a touching reunion of the Lyons brothers as Andre and Jamal come together to help Hakeem get over his ordeal. We find out that Hakeem has been freaking out because he didn’t fight back when he was kidnapped. His brothers let him know that staying alive is always the first priority and we get a really lovely scene with the brothers in a group hug.

After an initial hiccup and a show of support from Mirage A Trois lead singer Laura, Hakeem kills his verse at the showcase and all once again seems to be well in the youngest Lyons’ world.

Jamal is wallowing in self-pity after Michael’s infidelity and he seeks new inspiration from record producer Jameson, who also happens to be gay. For yet another week Jamal’s storyline is boring and pointless. Jamal was such a high point of season 1 and I think the writers are really struggling to figure out what to do with him this season.

The episode ends with Cookie and Laz finally giving in to their mutual attraction and the camera leaves us with the pair in the throes of passion and with a close-up of Laz’s very own Cowboy tattoo. Cookie’s sleeping with the enemy DUN, DUN, DUN!