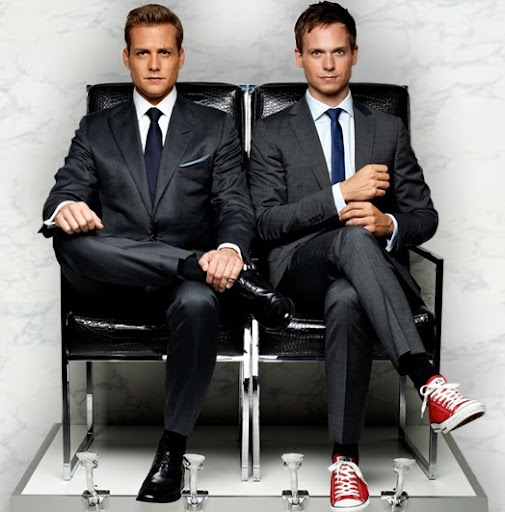 May I be honest for one second here? I feel as though this season of Suits needs a change and quickly. I haven’t been engrossed by the goings on at Pearson/ Spector as much as I used to be and I’ve been trying to figure out the reason.

I think the prolonged, over-arching case of the Walter Gillis takeover is hurting the show. We’ve already had 3 seasons to invest in the personal lives and careers of our main characters and now we’re being asked to care about players in a random case that should truthfully be a “case of the week”. This takeover storyline is taking us away from some of the characters we care about and I think going back to a case of the week formula would only benefit the show.

Moving on to this week’s episode, Logan wants Harvey to permanently take Mike out of the game in the takeover mess because he’s sick of playing nice. Donna, who still meets up with Mike over cups of coffee, lets slip that Harvey’s been after the master tapes for his father’s solo (!) album and Rachel is still trying to navigate the politics of working with her former lover Logan.

Logan pressures Harvey to really push Mike’s buttons and he proposes hiring a private investigator to dig up any dirt on him. Harvey, knowing the disastrous implications of this, pre-empts Logan by telling Walter Gillis of Mike’s marijuana dealing past. He does this in order to wound Mike superficially and not mortally. Mike is then summarily dismissed by Gillis and he then retaliates by obtaining Harvey’s father’s master tapes in order to keep them out of Harvey’s hands.

Are we keeping up with the level of petty going on here? Like many people, I do believe that Harvey perhaps took it a little too far in spilling Mike’s druggie secrets to Gillis but nobody is yet to offer a viable alternative. What other piece of information could Harvey possibly have spilled about Mike that was bad enough to get Logan off the scent about him being a fake lawyer? Yes, Harvey did pile it on a bit but I really don’t think he had much choice. In the interest of fairness, I suppose it can also be argued that Mike was then justified in exacting a personal revenge on Harvey with the acquisition of the master tapes.

I think this episode was really a showcase for Mike’s many insecurities. His desperate and grasping need for approval from Harvey is just annoying and he also laid bare his insecurities in his relationship with Rachel. He begins by questioning how deep her feelings were for Logan and of course he has to take it one step further by actively seeking out the transcripts of an old deposition where she gave detail about their relationship. Rachel, to her credit handles all of this like a champ but a lingering camera shot on her face as she reassures Mike makes me think that there’ll be far more to this story.

In our other storyline, Jeff (who I’m still loving) uses Louis in order to get more face time with Jessica in the office. Jeff’s maneuvering leads Louis to believe that Jeff is in love with him (of course he does). Of course he’s quickly disabused of this notion and once he realizes that Jeff was merely using him to get closer to Jessica, we are once again treated to a “woe is me” scene involving Louis. I’ll say it yet again, the show needs to stop going down this route with Louis. It’s beyond repetitive now.

More interestingly, Jessica fully articulates to Jeff why she cannot have both a professional and personal relationship with Jeff.  She has worked far too hard to be the only woman in her position in the city to be distracted by some ass.  I really do love Jessica’s character and I think she’s one of the best female characters on TV (along with The Good Wife’s Diane Lockhart). Because of that, I admire that she’s really trying to stick to her guns but this is TV, how many episodes do we give it before she allows Jeff to press her up passionately on a wall? Now that she’s no longer scheming and plotting with/ against Harvey we actually get a chance to focus on her personal life. Jessica and Jeff sizzle when they’re together and all this chemistry must have a payoff soon.

Here’s to hoping this takeover storyline wraps up soon and that Mike and Harvey’s bromance is quickly restored. I’m ready for the Suits I love to return.